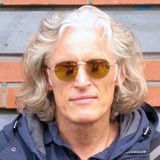 Never miss another
show from DJ Graham B

UK DJ / producer, based in Amsterdam and recognised as a pioneer and former member of the SOHO CONNECTION team whose parties were instrumental in popularising house music in the late 80's.

He went on to organise and host the legendary CLUB 802 JAZZ BOP parties at the Paradiso and dubbed "THE GODFATHER OF JAZZ DANCE", while at the same time held a residency at an infamous Amsterdam club joint called THE RICHTER for 9 years until it closed.

He went on to coproduced a band called Electro Coco, which won an Edison Award for their debut album in 2005, and was a top seller for a number of solo releases and co-productions on a project called Jazz Juice, released on UK label: Freestyle Records.

His sound is eclectic, often exotic, yet always soulful, funky and progressive. He is currently the Saturday night resident at PLLEK (NDSM, Amsterdam) and has his own DJ / musician combo called JAZZ BEAT which is often featured at 40UP parties.