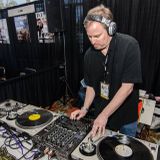 Trance Music, Vinyl Master, and 29 year DJ veteran Golden Boy Mike has headlined clubs internationally in Mexico and on both U.S. coasts from Florida-California, Hawaii, Las Vegas, Chicago, and everywhere in between.

He has been ranked as high as the #1 Dj in San Diego, #92 Trance Dj in the world, and #63 Dj in the United States on TheDjList.com.

He was named "Dj of the Month" by Kevlar Productions and won 1st Place in the Rock the Spot and 2nd Place in the President's Day Dj Competitions.

His original production, "Angel's Cry", hit #4 on the tunes4djs.com Trance Chart and he has remixed songs for artists such as Billboard charting Kim Cameron and Raquela.