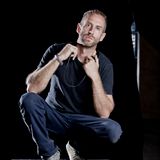 Gideön is co-counter and creative director and musical curator of Block9 at Glastonbury Festival. It is the worlds largest greenfield festival and home to Block9’s underground queer nightlife institutions NYC Downlow, Genosys and IICON.

Gideön has a background in music spanning 30 years. In parallel to his role as creative director at Block9 he is also touring DJ, vinyl collector & musical curator. He has a BA Honours in music and produces music under his DJ name Gideön.

Gideön has been involved with political activism over the years and is now increasingly involved in organising events partnering music and protest, often under the banner of R3 Soundsystem. Together with Love Music Hate Racism, Gideon organises major sound system interventions on many of the Stop Brexit and Stop Trump and Anti-Fascism protests. He is also actively involved with several LGBT+ and human rights organisations.