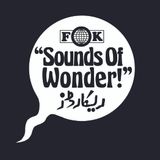 Doug Shipton- Out of The Wood Show 198
by WNBC.LONDONReposted

The Attic Podcast: 62. Doug Shipton
by The AtticReposted

Behold Finders Keepers, a British record label, 40 years in the making, introducing fans of psychedelic/jazz/folk/funk/avant-garde and whacked-out movie musak to a lost world of undiscovered vinyl artifacts from the annals of alternative pop history.