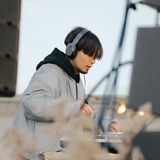 Live recording at ageHa THE GRAND FINAL
by Eita Godo

Born and raised in Tokyo, Eita has developed his roots as a DJ since he was little. He still remembers his days in elementary school when he played cassettes with his favourite songs for three years straight. He officially started his career as a DJ when he was 18 after playing in a band through his high-school years.

While his musical style is mainly based on house and techno, he has earned the reputation as a DJ who “selects tunes that matche the vibe while being unconstrained by genres”.
He started off in smaller venues and gradually built his capacity as DJ for bigger venues. He currently plays at various hot-spots in Tokyo such as Ageha, Womb, Origami, Air. He is also a DJ-in-residence at Rhythmholic@Womb.
He has supported many artists from overseas such as Dennis Ferrer, Soul Clap, Sharam, Dimitri From Paris, MK. Darren Emerson, and more.
He has played at countless parties, StarFes'14.,Ultra Music Festival Japan14',many fashion shows, and other events such as Tokyo Mot