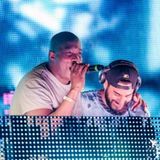 "You Don't Know " him but you really do. He's the man behind the lyrics on a lot of your favorite songs. From his first track, #1 hit with Armand Van Helden, "You Don't Know Me" and Powerhouse "What You Need" to Bob Sinclar's chart topping hits "Love Generation", "Sound of Freedom" and "New New New" to Erick Morillo's "Believe", "Life Your Life", & "Stronger" and even pop sensation Sean Kingston's "Party All Night (Sleep All Day”). Pete Tong & Craig David just release a cover of “You Don’t Know Me” on Universal with music provided by the Heritage Orchestra conducted by Jules Buckley. And his latest release Purple Disco Machine feat Joe Killington & Duane Harden “Devil In Me” on Sony has been dominating the airwaves in 5 counties so far.

When he’s not traveling the World performing, you can catch him every week on his Duane Harden Voces Radio Show.