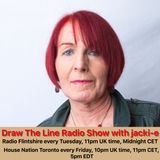 Never miss another
show from Draw the Line Radio Show

Draw the Line Radio Show features the great music being made by female producers, musicians and DJs in techno and other genres of modern dance music.
The show streams on Redefine Radio every Monday from 3pm UK time, 4pm CET.
Listen live link:- https://www.redefinethis.com/onlineradio
The show is presented by jacki-e, who is also co-presenter of A Darker Wave. The first hour features a mix of music made entirely by female producers and musicians. In the second hour we give control of the decks to a guest female DJ.
The purpose of the show is to feature some of the great music being made by women. Wherever you look there is a massive gender imbalance. Music made by men comprises over 90% of track lists and festival and club line ups. And yet women make up 50% of the population, but you wouldn't think so by looking at the current state of dance music today.
It's time to say NO to gender imbalance in dance music.
It's time to DRAW THE LINE!!!!!