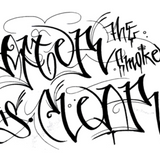 Never miss another
show from Doobyis

Doobyis is an emcee in Alberta who hosts a show called #ATSIC to help spread Hip Hop to audiences who don't hear enough of it.

"After the Smoke is Clear" is going strong on it's second 52 episode season, airing twice weekly on CKXU from the University of Lethbridge. The show plays new Hip Hop that sounds like classic Hip Hop.