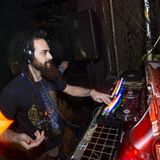 I began to listen to DnB since christmas 2017.
The music just stunned me so hard that i decided to start dj-ing.
And so i did. Some friends and I founded the "Sternhagel Kollektiv" and organized some partys where i could practice my "skills".
A few months later Dj Upzet (the owner of the Void-Club Berlin) listened to some sets which i had mixed with traktor and gave me the chance to practice on CDj Playern (at Void-Club).
In the end of June 2018 i played my first opening/warm up set on CDj-Playern at the "Step Higher" Party. And a few months later (25.10.2018) i played my first set till prime-time at Void-Club.
Thx to all my friends, the "Sternhagel Kollektiv" and Matze (Dj Upzet)! All of them gave me the chance to develop myself!