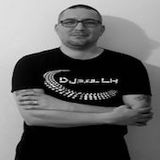 Never miss another
show from Paul-LH

I originally started to learn how to DJ in 1991 at the age of 11 and my first DJ name was DJ Hogie (Don't ask)I became part of a sound system called Blackstone Livewire in 1997 and I was given the name DJ Skratch.
I was a Garage and House DJ for Blackstone.
I became a digital DJ in 2006 but it was like learning how to DJ all over again!
I moved to Spain with my Family in 2007 and still managed to get some bookings.
We decided to come back to England in 2009 and after coming back I started to invest in digital DJING a lot more.
I became a volunteer working behind the scenes at Inspiration fm 107.8 a local Community station in Northampton in 2010
I had no intention of becoming a presenter but I was asked to cover a presenter one day and got the presenting bug.
I ended up with my own show called the Thursday Night Mix show for 5 years
and I have had Co hosts on the show alongside me,
I also presented Drivetime Wednesdays.
In 2019 I went to Ibiza for Mixfactor competition.