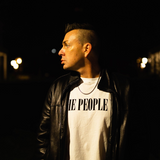 Some people prefer the word taste maker, others selector… Despite your preference, bridge and tunnel beat co boss, Cheyne Christian has been making people move, since the early 90s.

Aged just 17, he became resident at one of NYCs most prestigious Underground, The Tunnel and was part of the 90s explosion of New York House. His love affair continued into 2007, and saw a handful of successful productions along the way, including the Tribal Remix of C&C Music Factory “Sweat” that topped Underground and Billboard Charts.

After a 12 year self-imposed hiatus, Cheyne Christian is back, and not wasting anytime. His high energy house infused tribal beats and techy grooves have climbed to a handful of Top 5 Beatport Chart Positions. DJs like Claptone, David Guetta, Fatboy Slim and Benny Benassi play his tracks in their gigs and Radio Shows. Cheyne’s signature sound has landed on legendary labels like Robbie Riveras Juicy Music, and Toolroom(August 2020).