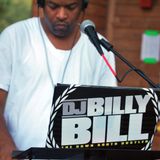 Never miss another
show from DjBillyBill

Known as the "Blend King & All Those Things", I was able to take two songs and turn them into what I called the "Unknown Flava". Now known as the "Blend Tape OG", it's my job to rep the south but at the same time stay true to Hip Hop and educate individuals about real music. Having rocked clubs up & down the east coast, also sharing the stage with artist like Nas, Rakim, The Notorious B.I.G, Redman, Busta Rhymes, The Roots, 2Pac, Charlie Wilson, Chrisette Michele, Lil Kim, Funk Master Flex, and many others, I've built a name for myself and earned the respect of many in the streets as well in the music industry. Still going strong with no plans of letting up, I'm working on the next faze of my career. Stay tuned!!!