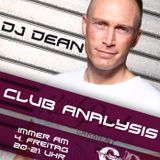 Never miss another
show from Dean1

DJ Dean is part of Hamburg's absolute bedrock in
terms of trance - responsible for about 72 'Tunnel Trance Force' compilations, several projects (e.g.
'The light') as well as numerous albums and singles which all topped the charts. In 1992 he started to
conquer the hanseatic club scene step by step. After his big success at Time Tunnel Rave in 1995,
shortly afterwards he became resident at the legendary Tunnel Club in Hamburg. Even after two
decades DJ Dean is undoubtedly still one of the exceptional artists in the German trance scene.