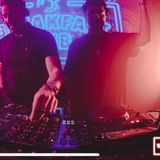 Darren Crxss has been a major player in the club scene since the late 90's, holding residencies at Fibre (leeds) and Relish (Doncaster) plus many more within his career mastering many genres and styles of music. He is possibly one the north's leaders in providing passion filled and inspiring Dj sets on some of the hottest dance floors playing old school classics right through to upfront deep minimal tech, Influenced by, (John Digweed), (Steve Lawler),(Huxley), (Eats Everything), and (purple disco machine.) to name but a few. His passion for music and DJ'ing is second to none and never fails to deliver it to the dancefloors where he is recognised for his uplifting and energy filled sets.... He started his DJ career playing Majorca and progressed to some of the most iconic venues playing alongside some of the biggest names on the circuit