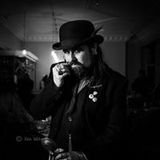 Dandy's first forays into the world of DJing started playing 'proper records' in the back room bunker of a West Country biker bar. Sadly the bar in question is no longer with us, but 20 years later Dandy is still at it! With guest appearances at events & club nights across the country, and a residency at Morecambe's ‘A Splendid Day Out’ steampunk festival, until very recently Dandy was one half of the duo behind the long running Lancaster goth night ‘The Dark Side Of The Lune’. Dandy loves music in a myriad of styles, but if forced to pick a favourite then the work of Mr Bolan & Co. in T-Rex would probably top his pops! Dandy is delighted to have been a part of the Hard Rock Hell Radio team since August 2020.