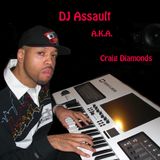 Born Craig De Sean Adams and raised in Detroit, Craig came to dance music like many of his Motown brethren, via the radio. Detroit radio jocks made lasting impressions on the young artist. Mixing records since 1982, Craig has been indoctrinating people with his own take on Detroit dance music, which is very much an amalgam of his radio predecessors. The introduction of scratching and rapping to non-Hip Hop genres of music, this style is something that could only have come from Detroit.

DJ Assault A.K.A. CRAIG DIAMONDS ‘The STREET NARRATOR’ is hard at work with his label and a place to finally call home ‘JEFFERSON AVE’. Making his mark as a well established international DJ since 1997. Assault continues to globe trot yearly all around the US and Canada. From the United Kingdom to over 23 European countries, Australia, South America, and Asia are also among countries that have felt the bass. He is also the man behind a whole new set of beats.