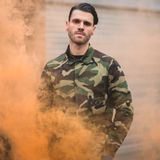 Playing everything from house, techno & disco, to hip hop, funk & rock since 1999. A former DMC Young UK DJ of the year featuring in clubs and on national radio from the age of 16. DJing across the globe with the likes of Cafe Mambo & Ibiza Rocks. Also a stadium specialist with the likes of UEFA, England Rugby, The FA, NFL & MLB. 2021 was a break through year, making global press as resident DJ for EURO 2020 at Wembley Stadium playing to a global TV audience of over 1bn, followed by a debut release on Cr2 records, supported by BBC Radio 1, Kiss, Tiesto, Fatboy Slim and co.

Whether its a boujee party at the Burj in Dubai, a 90,000 crowd at Wembley, or raving at Ibiza Rocks, its always about great music, good vibes, and creating memories with zero ego. Energetic mixes, home made edits, and music collected over 2 decades of DJing.

Have fun with it and make sure you smile