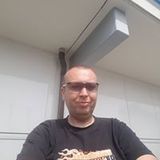 DJ R.I.P. started Dj’íng at the the age of 14. At a party on his secondary school. The Glopper in Capelle a/d Ijssel. That was in the mid eighties. At that time he played the music from the Dutch Top 40. After that he played several times at his secondary schools, Elout MAVO and City College in Rotterdam.
In 1987/1988 he started to play hip hop and rap and did a lot of scratching, mostly in his own basement.
In 1990 DJ R.I.P. visited his first real (hip) house party, Orange Houseparty near Maritime Museum in Rotterdam. He thought that is it “House”.
In 1991 he organised his first own houseparty in Doelari, Rotterdam. Where he played also. In that same year he moved with his houseparty’s to Gouda Garenspinnerij. There he played the old techno. The second party overthere became more hardcore minded. He booked Holy Noise. That was a good move. There came over 1.000 people at that rave. The third party there was with The Euromasters, also well known in the ha