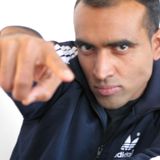 Never miss another
show from DJIQNL

At a young age (13) IQ was always interested in all kinds of music.. HIP HOP became his passion,
he got touched by the art of deejaying

He began playing music for low budget parties and events until a few club promoters had discovered his club talents.

From there he became resident DJ for big clubs in the Netherlands and Europe.
and started playing @ parties, preparties and afterparties for artists such as:

IQ has also done a bunch of projects in many scenes

His own favorite style is a combination of the latest musictrends mashed up
with Classics.

With his excellent mixing skillz he knows how to rock the crowd !!