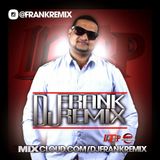 Never miss another
show from DJFrankRemix

Dj Frank Remix went from being born and raised in the Dominican Republic to residing in the city of New York. As a child he always enjoyed music--everything about it. He knew from a young age that he wanted a career that had to do with music. He joined forces with LosTraficante (LTP) which has helped him broadcast his deejaying skills. Two years ago he began making remixes and editing music. His choice of music for mixing is the music that reminds him of his homeland like bachata, merengue, dembow, salsa and more