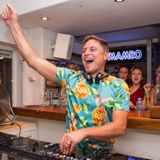 He regularly plays at a number of leading venues on the island including Eden, Es Paradis & Hostal La Torre.

He also has a weekly syndicated radio show that airs on numerous stations worldwide that has a reach of over 2 million listeners a month.

Inspired by and named after the American Blues and R&B musician William “Willie” Lee Perryman AKA Dr. Feelgood & the 1967 hit by Aretha Franklin Dr. Feelgood (Love is a serious business).