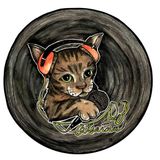 DJ CatsaNova is a radio personality for KUSF college radio at the University of San Francisco. A recent Bay Area transplant now living in Oakland, DJ CatsaNova is hailing from Harlem, NY. After spending the last 11 years in the U.S. Army, completing 3 overseas tours, and obtaining a degree in Criminal Justice his passion for music has lead him to study Media at the University of San Francisco. Before wanting to pursue a career in radio, he wrote and performed his own music under the name "Nova Sosa" which he has released a total of 3 LP's and 7 music videos. His love for music is rooted from his years growing up in the streets of New York in the 90s and early 2000s, with a love for genres that span from rock n roll, to reggae, to classic rock, and even reggaeton.