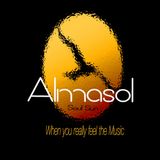 Rockin' the BEATS w/djKC Productions on VSR 9.22.2022
HQ
by djKCProductionsReposted

DJ ALMASOL is a DJ / Remixer / Music Artist who represents

Almasol-Entertainment -" Where Soul and Passion are Spread Through Music"

Biography -
Almasol is an American DJ of Puerto Rican descent born in Brooklyn , NY. He began his music career at a ripe old age of 10. Since a very young age, he was always fascinated by music and the people performing and broadcasting these songs to the masses. He began collecting records and building an impressive record collection in an effort to expose music to others. Almasol became involved in the DJ / Hip Hop culture that influenced his playing style. He honed his skills by performing parties and events through out New York and New Jersey. This soul and drive for what he does, makes Almasol a stand out among his DJ peers. Almasol went on to study Audio Engineering and become a Recording Engineer / Music Production Specialist.
For Bookings go to WWW.ALMASOL-ENTERTAINMENT.COM
Now You Know.