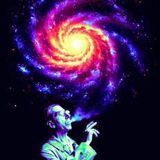 ... since his early years, Cosmic Oneness has had an innate love for music and the passion to learn new musical instruments. Deeply influenced by bands such as Pink Floyd, Dire Straits, Deep Purple, Led Zeppelin, The Beatles ... he picked up the keyboards during his early teens and went on to learn playing guitar with no formal training.
In the following years Cosmic Oneness discovered Goa Trance and instantly fell in love with the Psychedelic Goa Vibe ... had some amazingly uplifting, some paradigm rattling experiences dancing on the beaches and jungles of Goa. He has been playing psychedelic music since 2006 and has played at many gigs in Goa and other Indian cities. His style is purely psychedelic with some wild twists to keep the dance floor thumping and some supersonic tunes to awaken certain unconscious parts of the mind !