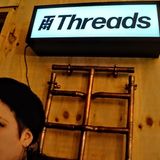 Never miss another
show from Corporal Tofulung // The Doll

[This show has been retired after 33 episodes]
RFA WITH CORPORAL TOFULUNG on Threads* Radio (Berlin)
https://threadsradio.com/project/rfa-with-corporal-tofulung/

A monthly excursion into sound art, field recordings, noise, improvisation, musique concrète, drone, and aural texture from around the world.

RFA is a continuation of this style of programming that embraces underrepresented artists and seeks to uncover new sonic experiences.