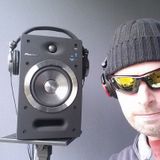 Real Name Cornelis - Call Name (Cokkie), born and raised in Rotterdam in The Netherlands and has been living in The Hague since a few Years Now . Living together with his girlfriend and has two daughters.
History
His love for records started very early, around When I was 8 years i bought his first singles, much later at age 15 I had my first mixer of alecto spared with holidajob.a few years later I had bought my first quick start turntables at right in rotterdam they were not really good quality but then came through the brand was soundlap.ook me on the flea market an amplifier cassetedeck Bought at age 19 I had mixer of alecto and 2 turntables of soundlap and a refox tapedeckt.

I've also been saving vinyl mixes for years, I started about when I was 12 with the first hotplate series from Canada that were one of the first commercial mixes to get through label ramshorn later came the bootleg mixes the discobreaks and many others those around that time under the co