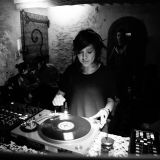 After studying music theory in her youth, Coralie Monnier put aside the piano, then the synthesizer in favour of the turntables.
Immersed in electronic music since his early childhood, Cora M. learned to mix at the age of 17. Attracted by the minimal German and now the Romanian scene, she developed her own style, far from all stereotypes.
She expresses her music through djs like Zip, Margaret Dygas, Francesca Lombardo,tInI, Mayaan Nidam, Soul Capsule, Masomenos... from which she draws her inspiration... In short, a mix of Deep Micro House mixing groovy & gliding sounds through a sharp selection of avant-garde tracks. Her rhythms improve over time, in bars, clubs and afters Montpellier such as Villa Rouge, break club, Yaka, L'antirouille, Zoo, but also in Barcelona where she will put her turntables for 2 years (Macarena club, Input Club, ..)

Based in Crans Montana for 2 years, she was a resident at the Cry d'Er Club d'Altitude, a high place for electronic music in Switzerland, which ho