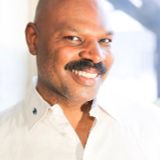 Support Terry Thompson by subscribing directly to this channel and get access to exclusive rewards.

If you’ve ever seen Terry Thompson spin, you know that he has the energy of two teenagers. There is nothing but pure electricity from this veteran DJ. Whether it’s a small intimate venue or massive event with thousands of house music fans-- he always delivers.

Multi-talented Chicago native--Terry began spinning records at the age of 16. He has held residencies in legendary clubs from east to west coast. Terry lived 6 years in LA and Hawaii-playing at hot 80’s venues like the Wave Waikiki and Pink Cadillac. During the mid-eighties, he introduced the Hawaii nightclub dance floors to house music.