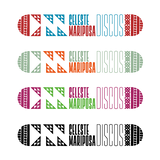 Never miss another
show from CelesteMariposa

CelesteMariposa is an unconventional performance built from old Lusophone African pearls inspired on African “Bailes” that joins grooves from all the 5 ex-Portuguese Colonies Angola, Cape Verde, Guiné-Bissau, Mozambique and S. Tomé and Príncipe. Most of the records are almost unheard of in western culture, but were naturally found within Lisbon´s deep African connections.

As in the western world almost exclusive attention is payed to Anglo-Saxon music, The Afro-Baile is a rare celebration of Groove from its cradle: A voyage through time from the bases of instrumental funaná to the rough Angolan Merengue, besides Semba, Gumbé from Guiné-Bissau, Socopé from São Tomé e Principe and Mozambican Marrabenta.
PUXXXA!