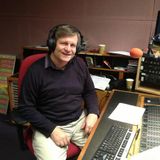 Having survived the perils of the commercial world for 33 years, Barrie started writing as a cathartic response to being put on the scrap heap by his employer.
Barrie lives in Bedfordshire, England with his wife Suzanne and a scruffy mutt called Kate. His two children have supposedly flown the nest but reappear on a regular basis. Barrie needs to sell a lot of books to keep them all in the manner to which they’d like to become accustomed!
Due to lack of talent Barrie failed as a rock star but for nine years presented ‘The 70s Album Show’ on BBC radio. He now presents the show on BlackCat Radio, Thursday evenings 7-9pm
His first novel ‘A Higher Authority’ was published in May 2014, the sequel, 'My Enemy's Enemy' was published in December 2015. He is currently working on the third book in the series.