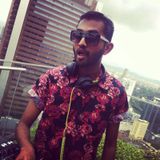 A self- professed late bloomer, Axel Groove found his inspiration following 7 years in the wilderness, also known as the concrete jungles of Australia. The underground music scene here reignited his long lost passion to educate the masses with the sexy sounds that is house music.

Once back in Malaysia, he signed up with Excessive Studios where he
honed his skills under the tutelage of legendary Bryan Burger. After a year or so, he ventured out on his own playing at venues such as Zouk,Vertigo, Establishment, Bedroom, Frangipani, Pisco, Marini’s on 57, The Roof, Marquee, Nagaba, and private events like Future Music Festival Asia, Red Bull Music Academy, Glenmorangie, Supermodel Me, Tropfest and Fred Perry Subsonic.