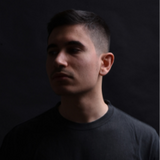 Never miss another
show from Aurelios

📝 | Biography:
Aurelio Blandino better known as "Aurelios" is an Italian music producer and dj.
He started to learn more about music production at the age of 14 years old,getting hooked into EDM after a while.
Trying always to be unique and innovative with his music,he did not go unnoticed by some big labels like Spinnin Records,Musical Freedom,Revealed Recordings and Mixmash Records.
Aurelios’ single ‘I’ve Had Enough’ was hand selected from over 1,900 submissions for The World’s Biggest Demo Drop, a Tiësto-supported contest to find the next generation of DJ and production talent.
Having already found support from the likes of Tiësto, Hardwell, Timmy Trumpet, Laidback Luke and Lost Frequencies, Aurelios is now ready to stake his claim as dance music’s next big thing.