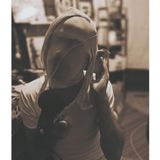 With a past of party organizer, Anonymous Z became more active behind the decks when reaching Saigon in Vietnam, he sneaks in the scene by creating his signature Mad Circus Parties. Joining the Banana Hustle crew in their punchy tropical frenzy, he participates to promote and develop their unique vibe.
Originally a Techno head, he receives a taste for digging unique tracks may it be Afro, House, Disco or Funk. He complements the whole with his special selection of hand pick Techno and Deep House.
His non linear sets are most often improvised, driven by the dance floor and over a variety of a music styles with tense and groovy basslines and epic storytelling melodies always playfull with the emotions.
Defining himself through time, he explores world music on the oldest age of electro. You end up with some trippy and dark downtempo sets with a strong tribal and south american influence or more groovy but not brighter sets of Nu Disco, Electro clash, Wave, New Beat or Dark Disco.