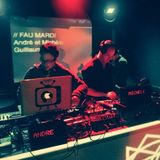 Since forming in late 2012, the pair have released a debut album, a follow-up EP, and studiously refined their live presence comprising fully improvised performances with an array of instruments, including Theremin, synthesizers, guitar, and drum machines.

With live sets spanning sounds between techno, kraut-rock, and downtempo, their performances have been featured by a host of forward-thinking music promoters. Their finely honed and open-ended approach to performance allows them to navigate their live shows with both the spontaneity of a dj and the signature sound of a live act, bringing audiences on an aural excursion that is dynamic, unpredictable, and always groovy.