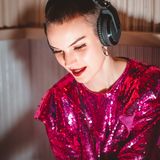 Never miss another
show from Ana Her

Ana Her is a London-born DJ, producer, classically trained flautist and presenter. She has presented on BBC Radio 3 and has had resident radio shows on Aspen Waite Radio, Vibe 107.4FM  and Hoxton Radio. She also hosts a weekly show with her DJ duo SUNANA on Select Radio, London & the UK's number 1 dance music station.

She has performed in hundreds of high profile venues including the Royal Albert Hall and Wembley Arena and at various festivals including Glastonbury and Latitude. Live TV and radio performances include BBC Radio 2 and BBC Persia. Ana has also played for various private clients including the Royal Family in Buckingham Palace.

After graduating from the Royal Academy of Music in 2013, Ana played with various orchestras including the BBC Symphony Orchestra and the Philharmonia.

Ana is renowned for her uplifting and fresh sets, mixing all kinds of House, Urban and Pop. She is a...