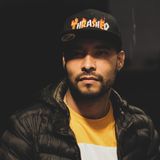 Born in Medellin, Colombia.
This artist began his musical career in 2006, when he is attracted by the minimalist rhythms of the time represented by artists such as Marco Carola, John Acquaviva and Tiefschwarz.

It is in 2010 he begins to take his first steps in musical production with his partner Andres Galeano, experimenting with his own sounds and fusing genres of his liking such as minimal and jazz, where his first ep called SAXO INFERNAL EP came from.

ALPHA HZ has always kept out of the city's most underground sounds and is now at the head of its MINEMAL RECORDS collective where it works on its new projects.