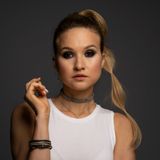 Never miss another
show from AlfiyaGlow

Alfiya performs solo as well as a part of a Dj/Violin fusion group Live On Violin Electro (LO<3)@liveonviolinelectro
which she started with her partner Ruda Culciar.

As classical violinist she has performed on the most prominent stages of the world such as Walt Disney Hall (Los Angeles), Wiener Hall (Salzburg), Carnegie Hall and Lincoln Center (New York), Kimmel Center (Philadelphia) and in various cities of Europe and Russia.

With her strong background in music and big love for EDM she has become a great producer of electronic music.