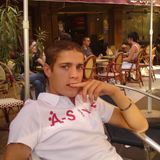 Born in the Paris region, Alex moved with his parents at the age of 12 years in the South East of France in Marseille area.
The first pieces for which he was drawn at a young age were dance music during the 90s when the movement of acid house music began in clubs and on radio.
These first lessons in djembe were a revelation when he was only 10 years old. Always attracted by new technologies, he began to compose his first songs at the age of 13 using a video game console.
He decided to deepen his passion on perfecting the most advanced equipement sequenced synthesizer and drum machine, on wich it had a chance to discover his surroundings and at this small private parties he loved occur. The genres were varied as his inspirations and his influences were too. It is thank's to these influences that his electronic music took a new style to each piece produced. He began his first mix at the age of 15 and since never ceased to improve in different musical styles.