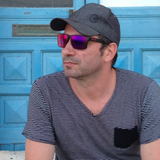 Memories of Hyperspace
by OfflandiaReposted

Since more than two decades promoter of the well-known Sinneswandel events, just as long behind the decks alongside of many who have embossed the electronic music culture and several partying nights, Adriano Mirabile, formerly known as a.d.i., looks back to a time with a deep insight into all facets of electronic culture! Today, he says, “I want to miss a single minute,” this time has also influenced, among other things, its current work as a producer. The music since long has come in his soul and flows in the studio in his tracks. A little quieter but for sure not silent, he publish today on renowned labels such as Senzen (Berlin), Stasis Recordings (Toronto), Sirion Records (Berne), Scheef Records (NL) and as well on Andrés Marcos Label Wondermachine Music, based in Zurich. His path leads him step by step moving forward. Stories he wants to tell, pushing forward into the deepest grounds, touch and seduce