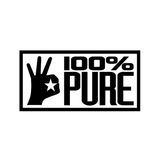 Never miss another
show from 100PercentPure

100% Pure is Amsterdam's longest running tech house label, co-founded in 1993 by Dylan Hermelijn [aka 2000 and One] & Sandy Huner and now run solely by Dylan.

International DJ, producer and 7 time label heavyweight 2000 and One has been a pioneer in the electronic dance music scene since the late eighties. It is his musical vision that has ensured 100% Pure has been continously spinning on the DJ decks for more than 25 years. Just a browse through the back catalogue is enough to make you breathless without even stepping on the dancefloor. Music visionaries including Detroit legend Derrick May have been featured on 100% Pure, so that in no time at all, 100% Pure became the dance fuel for party drivers such as Richie Hawtin, Loco Dice, Sven Vath, Luciano and has put Amsterdam’s sound on the international clubbers map.

Now 100% Pure is starting a new adventure with the monthly PURECAST, including special mixes and live sets by 2000 and One and many others!