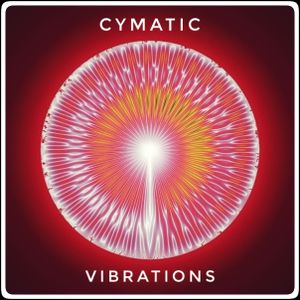 This show was 37th in the global electronica chart.

Cymatics - Definition
1. Physics - the study of sound wave phenomena, esp sound, and their visual representations
2. A therapy in which sound waves are directed at the body with the aim of promoting health

A new Cymatics set to break up all the 4/4. It's a varied collection of tracks that includes a lot of styles & sounds. However it retains the same dark and moody vibe of the series for most of it.

In contrast to the last Cymatics set I possibly had too much time to get this together hence the long set and 20 tracks. The playlist kept growing as I delved further down that rabbit hole.

It starts off slow and very deep with my love for shoegazey electronica getting a blast, but picks up the pace later with some breaks, DnB and psychedelia.

To any who listen I hope you enjoy. Tracklist in the first comment.

Kept having to stop what I was doing to check the tracklist! And the mixing was fun to listen to as well, nice variety of beats and tempos that never stopped driving forward.

So nice this Stuart. Listened in parts over a few drives and kept me thoroughly entertained and much likes the road I was driving on, it had plenty of twists and turns! Atmospheric, divers and expertly selected tracks. It takes a seasoned ear to put together a mix of this caliber. While on that subject, I have to say I am constantly impressed by how you have multiple genre series running side by side and I have yet to hear a dip in quality in any...the opposite in fact. To be able to source all that is no mean feat and truly appreciated mate (cue slow clap, stands up, claps progressively faster until entire room joins me

) I loved how you fleeted in and out of atmospheric dark, trippy sounds to lighter melodic wonders - really made for a listen that kept me captivated. Some absolutely glorious tracks in here and Id say you could probably guess my personal faves but Ill say them anyway! 'Without Motion' is stunningly beautiful and was perfectly followed by the burst of energy that 'Cleo' provided - amazing track! The beat in 'If You Go Down To The Woods' was a real head bopper! Really liked the delicate sound of the 'Let Myself Go' remix. 'Clasp' was a real highlight for me when it came, what a gorgeous hypnotic track. The remix of 'Brand New Love' is pure quality - love it. Top marks Stuart, yet again you let your experience and knowledge shine through! Thanks for sharing, Mixcloud needs more like you mate!

Hi Shane. Many many thanks for the awesome feedback and compliment pal. I was well chuffed with that yesterday when I saw it. I’ve been away from my laptop and Mixcloud the last few days and so typing this on phone with clumsy fingers but wanted to pass on my appreciation before forgetting to soon (old age has not been kind to my memory

). I’m glad the overindulgence at 90mins+ didn’t spoil it for you pal. I should have kept some in reserve for the next one but couldn’t help it. I went until I was spent.

. Anyway enough of these clumsy fingers, many thanks again pal. Talk properly soon when back at laptop

Really enjoyed this trip through electronic bliss ./.. nice one

Many thanks again Alan. Triple dose you must be all Fitz'd out

Very classy mix this Fitz and another great addition to this series . Very carefully constructed from start to finish with a array of eclectic sounds. ‘Kill Her With Kindness’ and ‘Let Myself Go’ amongst my favourites epitomising the tranquility of the mix and of course always great to hear a bit of David Holmes ... big fav of mine. Very tidy and professional mix this mate, enjoyed immensely! ;)

Many thanks Jay. I'm chuffed you liked it pal and you're the only on to mention the David Holmes track, which is a personal fave of mine too. That whole album was excellent. Thanks for checking it out and the great comment pal.

Enjoed from the beginning - gret vibez here, love the dubsteb / d'nb touch but there are so many highlights in this varied set. 'Cleo' is amazing, 'Ossify Them', love very much this one, 'If you go down to the woods', 'Waters Rising', 'Let myself go' one of the best track by Just Her imho, 'Sakura', & 'Last Time (Jon Hopkins remix)',... amazing show through electronic styles - Cymatics Vibration mission couldn't be better accomplished.

Much appreciated Attila. I'm glad you liked it mate. Some of my fave tracks you've picked there. Thanks for tuning in and the great comment.

Many thanks mate. I've heard of Walpurgis Nacht but need to look it up properly. I hope you're having a good one pal.

Hey Stuart, listened to this last week, sorry (again) for the late comment...been crazy for me, have commented on some sets and missed commenting on others...loved this...knew I would cuz this my fav series out of all the series sets you do...If you go down to the woods, Evil and Harm (2 thumbs up, loved this), Waters Rising (love Djrum, have all his stuff...incredible producer!), Hunger (triple heart here), Amok, and Let Myself Go (have this but not the Yost remix...I want it lol!!!). Much respect my friend, was a joy to start my day with this one.

Hi Debs. Many thanks for the comment & listen. Never a timeframe or obligation on either of course. However I am stoked to know you like it as I know this series is your fave of mine and so am always curious. I even added the Younger Brother track after hearing you use a Shpongle track on your last one (Simon Posford in both). Nice to dust off some dark psychedelics.
I'm away with work at the mo but will send you the Just Her track when home at the weekend. Many thanks again for the listen & lovely comment. I hope all is well in Dunedin.

Thanks Stuart, no rush on the track :))

I love your Cymatic artworks. Great stuff for my brain :) cheers

Thanks pal. I must admit I do like the one for this session the most to be honest. The red is striking.
Many thanks for checking it out. I hope you enjoyed the tunes too mate.

Many thanks Jay. Sound pal. Still reeling from that awesome Prog set you had out recently. Best I heard from you yet mate. I hope there's another one of those in the series planned.

what a deep journey

Thanks UG I'm glad you liked it mate. Much appreciated for the listen & comment.