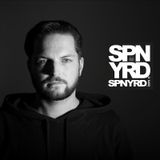 Never miss another
show from SPNYRD

SPNYRD bought his very first vinyl back in 2005. He immediately got infected playing electronic music and crafted the art of his DJ skills by using the legendary Technics MK1210 turntables.

Soon after his first steps in the crazy DJ circuit SPNYRD's deep passion and musical development began. He ignited playing classical House tunes and it didn’t take long that the development of his own and very unique style started energizing the people going bonkers during his sets. But his progression wasn’t yet to come to an end. Over the time he got more and more influenced by the Underground Techno scene of Hamburg.

Today, he is totally dedicated playing Deep-House & Melodic- to Dark-Techno. He`s absolutely driven to transport his sound and own productions down to the dance floor in clubs all over Europe. Beginning of 2019 he became the resident DJ of the famous and notorious underground Techno club "Waagenbau" in Hamburg.