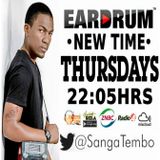 Never miss another
show from SangaTembo

In 2012, he created a Hiphop Show called EarDrum on Zambia's Radio Phoenix which he hosted until March, 2014 when he took a break to go to school, after which he pitched the show to ZNBC RADIO 4 (88.1MHz) where he currently hosts it on THURSDAY NIGHTS at 22:00HRS.. repeat episodes are posted here every Tuesday.