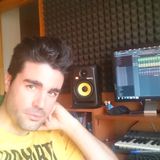 Spanish dj.
Trance and techno in all their ways are his sounds.
After many years mixing with some of the best djs around the world, he´s now working on his new projects.
He is a founding member of SUNRISE TRANCE FESTIVAL.One party in the south of spain which meets all the trance djs based in Spain.
Is also the director of one radio magazine called WE ARE IN TRANCE.
You can hear it every friday night from 22.00 to 00.00 hours in WWW.PLAYTRANCE.COM