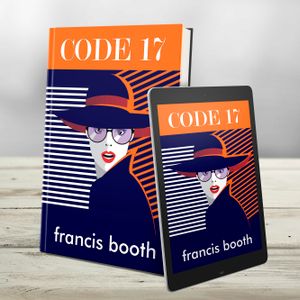 Code 17 is ow a novel, but it started as an album. The music was based on an imaginary 1960s British TV show featuring the beautiful, upper-class English spy Lady Laura Summers, a cross between Sharron Macready of The Champions, Emma Peel of The Avengers, Modesty Blaise and Pussy Galore. In Episode 1 Laura's fiance is assassinated at their wedding; unknown to her he had been a British government spy. His former boss offers her the chance to take over his mission and hunt down his killer. Using her career as an international art dealer as cover, Lady Laura travels the world looking for revenge. Each episode is set in a different exotic location around the world. This album contains incidental music from each of the twelve episodes. Words and music by Francis Booth, vocals by Frankie Nichols, produced by Steve Ellis for Planck Music.

Wonderful evocation of the 60s and all those fantastic TV programmes. The arrangements remind me of The Prisoner. I'm looking forward to getting my hands on the Book. If the music is anything to go by, it will be very authentic in approach and atmosphere. Singing 60s here we come!