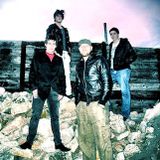 Never miss another
show from illicitdisco

Illicit Disco were formed in Shropshire during the summer of 2009 after many slightly intoxicated and drawn out conversations even being on the opposite sides of the world couldn’t prevent the momentum.

With a unique blend of storytelling, catchy hooks, rocking rhythms, sumptuous synths and crunching guitars, the band like to draw from every one of its vast eclectic influences which create this cocktail of rock music.

Having received featured artist status on the Microsoft Windows Media Guide alongside acts such as Kings of Leon, Muse, Radiohead and Robert Plant leading to thousands of downloads of the demo track Cipher which was described by the Windows Media Guide as “truly exuberant”.

Recently featured in the Beacon Radio session, Along with airplay from Amazing Radio, BBC Shropshire Introducing, Koobah Radio and 6 Towns in the UK all the way to Gashouse Radio in Pennsylvania, Cyber FM in New York City and Radio Liberte in France.