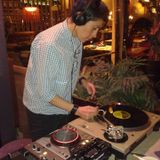 Dj Shak is Shak Benavides. His premiere as Dj was in 1995, but it wasn't until Sept of '97, when he officially debuted as part of a dj collective called Las Diyei-esas, that he decided to focus his artistic efforts on the turntables. Since then, his career as Dj has taken his throughout Spain and has covered practically all of Barcelona's best clubs. He's also the co-founder of one of Barcelona's best collectors shops, Wah Wah Records since 1992. Thanks to his work at Wah Wah, his musical sessions as Dj have encompassed a great range of styles and genres featuring exotica, downtempo, rare grooves, latin rhythms, funk, jazz, breaks, classic r&b, disco, postpunk, an even electronica. His tireless activity has caused him to be involved in various independent radio projects and TV programmes for BTV.