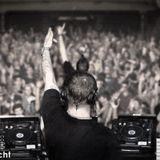 Hatcha’s roots go deep back into late ‘90s UK garage, Croydon and pirate radio. Originally the buyer at the now defunct Big Apple record shop, Hatcha was one of the very first DJs to pick up on the new dark strains of 2step that were being made by local producers like El-B, Artwork and Horsepower at the turn of the millennium. As the producers came into the shop to sell white labels of these niche new sounds, a community arose. The shop began its own label, Big Apple Records and its first release was the dubstep classic “Red” by the shop’s resident producer Artwork. The next releases came from his two protégés, Benga and Skream.
As the garage sounds from south London began to take on their own unique, dark swung direction, it became clear that the nascent scene needed a home. In 2001 Forward>>, dubstep’s founding club, started with Hatcha a resident. It was here he began to up the ante. While other DJs came with a collection of white labels (tracks immanently due for a public releas