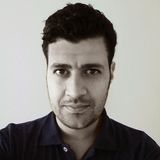 Never miss another
show from cranque

Once Upon a Time... Bastian El-Zohbi played a major role as DJ Cranque in Hamburgs club scene. This was in the beginning of the 2000ers. Among other things, together with Pelle Buys as Cranque & Unique as they were residents of the click they’ve accompanied international DJs over the years. Developing his style of deep, down and clear techy-sound. As part of the Techno-Boy Band Einmusik he played in clubs all over the republic till the project-split in 2007.