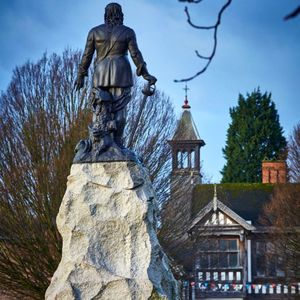 Oliver Cromwell is known for being the person who gave us democracy for the people over a ruling monarchy, but twice this year his statue in Wythenshawe Park has been vandalised. He has been condemned for his role in the Drogheda massacre and slavery. So was Cromwell a hero or villain or neither and did he really cancel Christmas? Historian and author Miranda Malins tells the story of England's Lord Protector. You can purchase Miranda's novel 'The Puritan Princess' from https://mirandamalins.com/ Produced by Ben Cooper for Wythenshawe FM 97.2

Thanks for your lovely comments Jan, Miranda was a star guest.

More from Ben on WFM